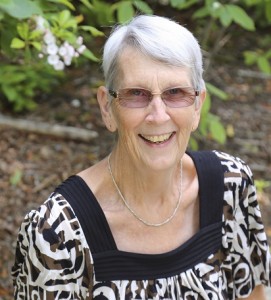 Janetta Fudge-Messmer was born in Herington, Kansas. Her mother raised her in a Christian home and Janetta gave her heart to Jesus at nine-years old. Best decision of her life.

As the youngest of four, she took on the role of baby of the family with zeal. Her siblings have stories to tell. Janetta graduated from high school in 1974 and attended business school, taking secretarial classes.

Not her first career choice, but women stand-up comedians weren’t the norm quite yet. Finishing business school, Janetta moved to Kansas City, Missouri. In 1978 she moved to Boulder, Colorado and met Ray – the love of her life and they were married in 1981.

She and Ray ran an auto repair shop until 1999. Janetta became a mechanic in the shop for about a year (in 2005 she published a story in Guidepost Magazine about their experience).

In 1999 they moved to Montrose, Colorado to open the Rusty Moose Bed and Breakfast. This was where the writing bug bit her. Yes, she’d always written – but only poems. In Montrose she tried her hand at submitting stories. Rejection came knocking, but she didn’t let it derail her love for the written word.

In 2002 she and her husband made a move to The Woodlands, Texas. Here she learned some valuable lessons. One concerned her claim to fame. Janetta says, “I was able to opt out of English class when I went to college. The teacher said I aced the test. Then I moved to Texas and found out the language in the South included words like: hankering, fixin’ and y’all. The way I thought about the English language went in a whole new direction. And I love it.”

Janetta joined two writer’s groups and also joined Toastmasters. Her reasoning: When she became a world-renowned author she’d need to talk in front of people. After completing the first ten speeches, her husband said, “She could always talk. Now she can speak.”

While working on her speeches and learning the craft of writing, Janetta submitted her writings, receiving publication for five of her stories and a poem.

November of 2013 she took part in NANOWRIMO (National Novel Writing Month) and wrote a novel called Early Birds. In January 2016 her dream of publishdom (her word) came true, her novel was published by Winged Publication. She’s still in awe of what the Lord can do.

Janetta loves to write, but knows in her heart of hearts that editing is her first love. Helping others to make their manuscript sing is her greatest joy.

Ray, Janetta and their precious pooch Maggie are full-time RVers. They travel around for most of the year and when the temperature drops to the 40s, they head to their park model in Fort Myers, Florida.