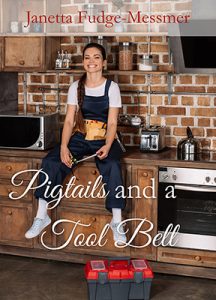 Samantha Barry decides to leave Rhode Island and return to her hometown of Hummingbird, Colorado. The reason for her move—her dad has retirement on his mind and wants his daughter to take over his handyman business. She makes the move.

Nathan Sherman, Sam’s boyfriend of two years, agrees to relocate to Colorado in a few months. But his move to the small town takes more time than first expected. Another problem arises, she takes over her dad’s business, renaming it Pigtails and a Tool Belt, and the phones stop ringing.

Samantha prays about her lack of business and comes up with a plan. She places a Help Wanted ad in the local newspaper. Imagine her shock and amazement when the first person to apply is her ex-fiancé, Zach Bender.

She agrees to meet him (along with her father). Sparks fly, but not in a good way. He brings her flowers. Sam’s ready to give him a piece of her mind, but hears her dad say instead, “If she’s not going to hire you, I will.”

Thank goodness he took the job. Two days later she injures herself. With one arm in a sling, Samantha has to let go, and let others help her out. This seems to work for a while, but after countless phone calls from her boyfriend, and more gifts from her ex-fiancé. Sam’s not so sure.

Sam begins to wonder if her ‘happily ever after’ will happen. Or is she finding the Lord has other ideas and her true love has been there all along?